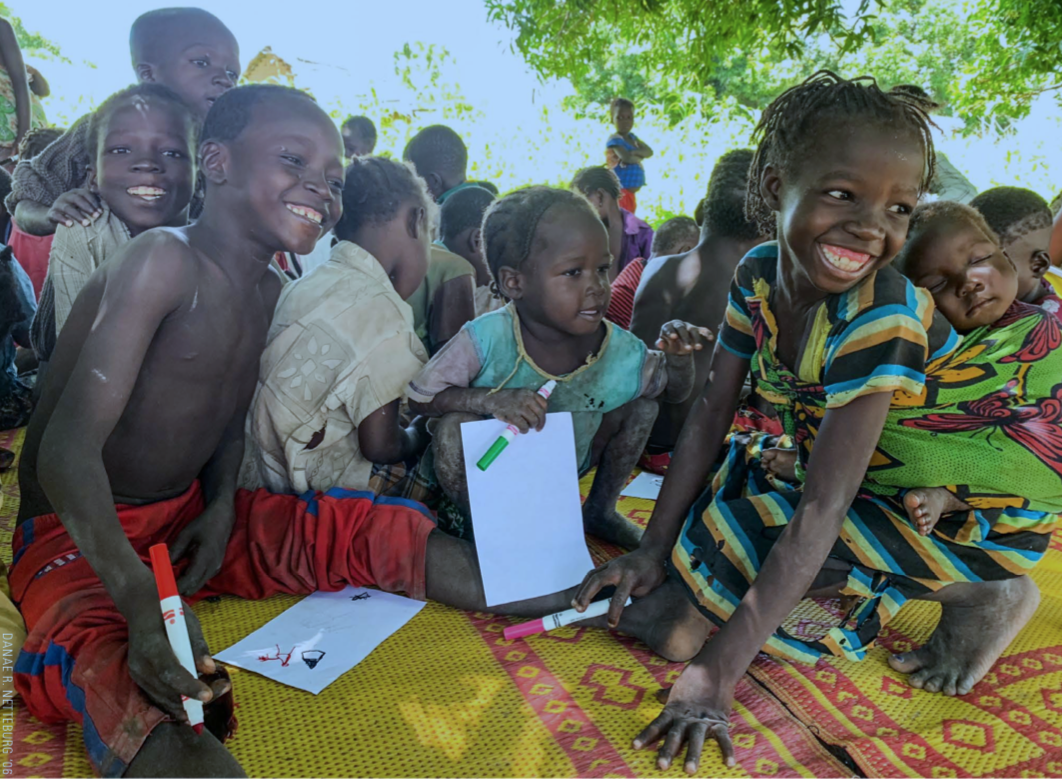 Socially, the next step after college was falling in love with a husband and having children. (Thank you Loma Linda for that husband!)

Spiritually, the next step was the mission field, what I had been looking for since leaving Africa as a student missionary and what drove me through the grueling life of medical school and pushed me through the long hours of residency.

I gave up my young adult life to medical school and resi- dency, as all physicians do. I had a purpose. My purpose was to go to the mission field. God called me.

African medical mission work was the goal influencing my every decision for 10 years. I finally found myself in Chad, Africa, in 2010, a bona fide missionary physician. I had reached my career goal. Now a decade later, we find ourselves asking God, “Now what?”

Missionary life. Missionaries. Missions. Sounds magical, right? Amazing people going to amazing places and doing amazing things. All stories have happy endings. Everybody getsbaptized. Allpatientsarehealed. “AndLittleJohnnynever sinned again” type of children’s stories in church. And the insinuation is that if those aren’t your stories, you have failed.

Well, we have failed. Patients have died. Souls have gone unbaptized. Endings have not been happy. Non-missionary

Not many people write about the part of mission life just before you come home, wherever home is. And whenever that is. We still don’t know.

How do you know when it’s time? As soon as you start wondering? As soon as your five years are up? When your children reach age X? Is it spiritual failure to leave the mission

field while you still have another year left in the tank? Do we push on until our marriages and our children crack?

We’ve had such a wonderful... no, that’s not the right word. Enjoyable? No, that’s not it either. Rewarding — yes, that’s the right word. Fulfilling — even better. I can’t think of anything more rewarding or fulfilling than our time serving in Chad. When I think of life in America, and I do think of it often, I love daydreaming about the nice things, clothes, food, health, and sports. But the daydreaming seems a bit empty compared to the health care we provide to nearly 20,000 Chadians each year.

Yet millions of people, physicians and others, lead fulfilling lives in America too. Maybe you’re one of them. Could we? What would that even look like for strange people like us? Who would we be? Ex-missionaries? After nine years in Chad, what does one’s identity become? Can nine years really define the rest of your life? Will we continue to make new stories, or will we be those annoying people whose conversations always turn to,“Well, that reminds me of this one time when we were missionaries in Chad, and...”?

And how did we even get to this point? The point of leaving. Are we burned out? Why would we consider leaving? How does a missionary know when it’s time to move on, to throw in the towel? Did we fail? Wait, are we even leaving? The plan doesn’t change day to day; it changes hour to hour. You know, that’s probably a sign.

We have two additional doctors here with us in Béré for the first time, and two more arriving in December. Do we stay and have more time to focus on evangelism and neglected nuclear family? Do we say the manpower is sufficient to replace us and take off?

Now what? How do you know when you’re done? We’ve come up with many good reasons to quit before, just like every prior missionary who felt the need to explain their departure. Nobody wants to quit. Children get homeschooled. Parents get older. Health gets challenged. But these reasons feel more like excuses.

How do you know when you’ve been in your post long enough? Certainly the Gospel has not been told to all the surrounding villages. Not all our patients have accepted the Gospel yet. All? Who am I kidding? I would be happy if some of our patients accepted Jesus. The truth is that some- times you don’t know the impact you are making. Maybe you’re not making one. What does it matter to save a life from a massive hemorrhage if they don’t give their soul to Christ? What is the importance of life? Why do we do what we do? What does it matter? How abstract and esoteric and philosophical should I let my mind wander?

And then God gives us little moments of definition, just when we are complaining to Him about why and how and when. Are we making a difference? Why do You still have us here?

A few months ago, we were under a mango tree on a Sabbath morning, as has been our habit for years now, bouncing from village to village every week, singing, praying, and teaching simple Bible stories out under the trees. There are probably a dozen or so such small groups meeting outdoors every Sabbath morning in the surrounding villages. Abel, who comes with us to translate from French to Nangere, brought a woman over to me because she had something to tell me.

Sophie wanted to introduce me to her son, Carton. It is pronounced with a French accent, but the meaning is the same. Carton, as in, a box. I was overjoyed to see this baby, now 5 years old, who had been born prematurely.

I had not remembered her, but Carton was one of our “box babies,” named for the high-tech empty cardboard box previously holding a dozen liters of normal saline. We have no help of neonatologists, incubators, NICUs, and all the rest when babies are born too early. The best we can do is boil water, fill an old plastic bottle, wrap it in a towel, and place the newborn in a cardboard box between warm, dry towels. Many of these newborns have stayed in our bedroom so that we can wake up at night and rewarm their bottles and ensure their proper feeding. Carton had stayed with us for several months, even requiring the nasogastric feeding tube I had placed for his nutrition.

When he was discharged, he left in his same sad little cardboard box, strapped to the back of a motorcycle with strips of bicycle inner tube. None of the villagers believed he would live. “Box baby, box baby,” they would say when referencing him. But miraculously, baby Carton grew up! And now, five years later, he is singing and listening to Bible stories under the mango trees.

Carton’s mother, Sophie, smiles as she looks happily at her son who was born prematurely and treated in a cardboard box but has now grown up to be a healthy boy.

It was a simple thing. No major surgery. Nobody pulled from the brink of death. Just an everyday box baby, back to say thank you.

What about you? The mission field doesn’t have a corner on the market when it comes to discouragements, frustrations, and challenges. And overseas missionaries aren’t the only ones called by God. Perhaps you’re floating through, rudderless. Perhaps you feel strongly called to where you are. Or perhaps you’re feeling called to someplace else, be it another job across the street or around the world or out of the medical field altogether. I can’t pretend to know God’s will for your life.

For the moment at least, we are still happy to be serving in Chad. For the moment at least, that is what we will do. Because we are still called by God to this place. Ask us tomorrow, and you might get a different answer. One of these mornings, when we don’t know our logical next step, we will wake up and ask God, “Now what?” And one of these mornings, He will say, “Go.” But not this morning. There are more box babies.

Article originally appeared in the Fall\Winter 2019 issue of the Alumni Journal - Alumni Association, School of Medicine of Loma Linda University