Global Conversations has opened back up to live in-person events!  Be sure to check if the event you're interested in is offered in-person or through Zoom.
To participate in webinar events, create a Zoom account for free.
Download the latest version: desktop here, mobile/tablet app for Apple here or Android here.

Faith, Bravery, and Resilience: Live Stories of Hope and Healing from Ukraine 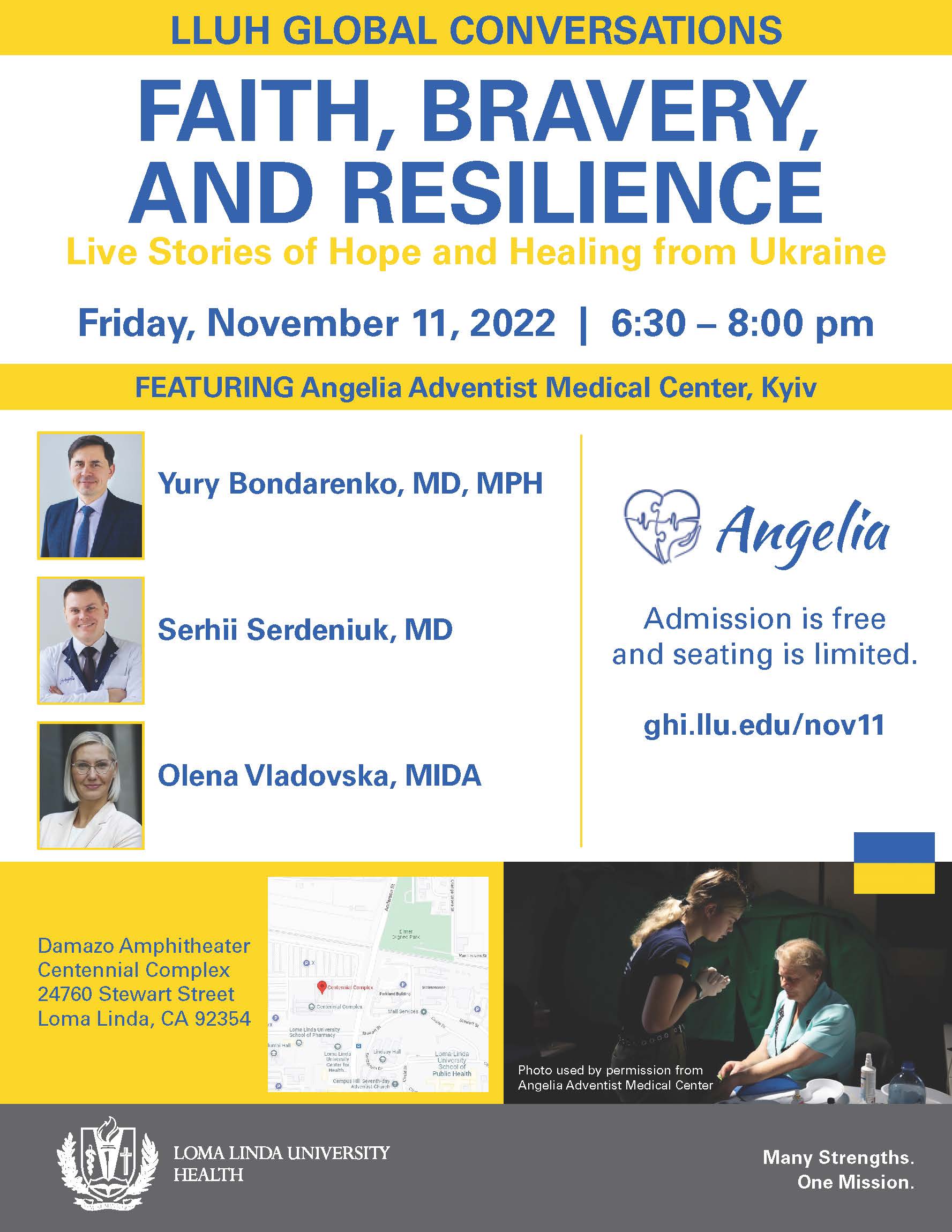 Dr Ron Mataya is currently Professor of Global Health in the Center for Leadership in Health Systems at the Loma Linda University School of Public Health. He is also a senior lecturer in the Department of Obstetrics and Gynecology at the University of Malawi College of Medicine where he helped start the residency program in obstetrics and gynecology. He is currently the co-director of the Global Health Women’s Initiative Baylor College of Medicine Malawi Project which continues to support the training of the residency program with funding from USAID and private donors.

As an obstetrician/gynecologist, he developed an interest in public health early in his carrier. In 1996, he won a one-year US government scholarship, the Hubert Humphrey Research Fellowship, which allowed him to study for a non-degree program in health policy, planning and management at the Emory University Rollins School of Public Health in Atlanta.

Prior to joining the LLUSPH, he was Director for Health at the Adventist Development and Relief Agency (ADRA/International) at their head office in Silver Spring, Maryland for 7 years. He supervised a global network of public health programs in more than 20 countries around the world. At the LLUSPH, he teaches courses in HIV and AIDS, reproductive health, maternal, newborn and child health. The Importance of Recognizing Existing Power: Leveraging and Fostering the Power of Influencers to Support Community-Led Change

Dr. Faramand has more than 35 years of experience in development with emphasis on program design and implementation, gender, gender based violence prevention and response, social inclusion and resettlements, human trafficking prevention and response, project assessments and evaluations, strategic planning, policy reform and advocacy. Due to her extensive global experience, she has a deep understanding of USAID, EU, UN agencies including WHO, CDC, the World Bank and the donor community.

Dr. Faramand is an adjunct faculty member and lecturer at the Rollins School of Public Health, Emory University in Atlanta, Georgia and also at the Milken School of Public Health at George Washington University.  She has a keen and practical understanding of development issues around the world especially in Asia, Pacific, East, West and South Africa, Middle East and Latin America and the Caribbean.  Dr. Faramand is responsible for the creation of numerous public/private partnerships enabling the procurement of many multi-million dollar donations and is a recipient of the Meritorious Honor Award from U.S. Ambassador Indyk and the Distinguished Alumni Achievement Award from Emory University. With the Biden Administration’s efforts to reset U.S. Foreign Policy, the need for soft power could not be more important. Ambassador McKinley is well qualified to speak about the benefits and types of soft power assets the U.S. Government will rely on in the future. Ambassador McKinley is an American Diplomat and career Foreign Service Officer, having served in Afghanistan, Peru, Columbia and Brazil. Most recently, he was a Senior Advisor to U.S. Secretary of State Mike Pompeo. In October 2019, Ambassador McKinley resigned in protest over the failure of the Secretary to support Foreign Service employees, such as Marie Yanovitch, the U.S. Ambassador to Ukraine who became embroiled in the Trump/Ukraine scandal. Water Rights and their Local Impact

Thursday, January 21, 12:00 - 1:00 p.m.
April Summitt, PhD
RECORDING OF EVENT
Summitt is currently the Provost of La Sierra University, having moved into this leadership role July 1, 2020. She has had a distinguished academic career serving as the Dean for General Education, and as Dean of the College of Arts and Sciences in 2016. She holds a PhD in History from Western Michigan University earned in 2002.

Summitt grew up near the Tennessee River and has always felt a strong connection to water. She researched U.S.-Middle East relations during the Kennedy administration for her PhD dissertation and examined the conflict over dividing the waters of the Jordan River in Palestine. Later, after moving to a position at Arizona State University, Summitt shifted her research focus to water in the American southwest, where she studied the environmental history of the Colorado River and American Indian history of the West in connection to water and environment.